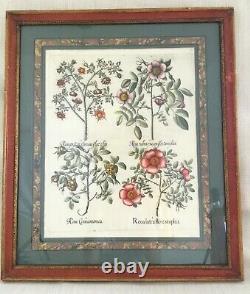 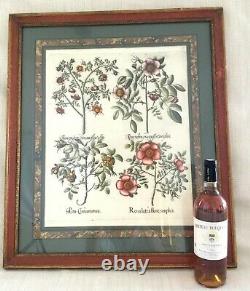 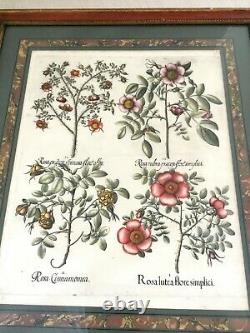 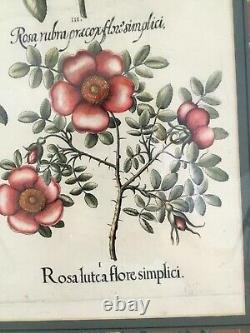 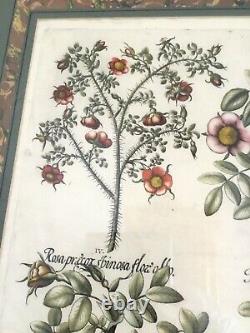 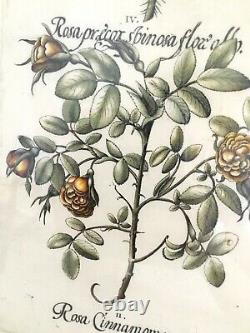 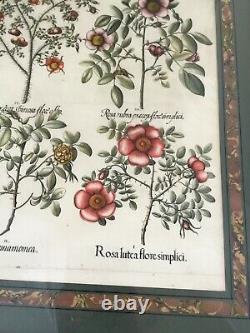 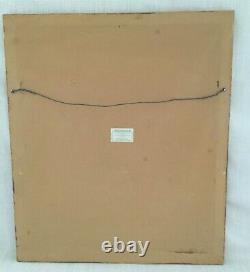 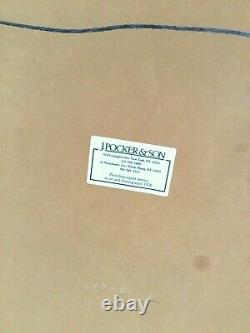 Engraving - Rosa Cinnamomea , 1613. Great used condition, usual signs of use, bumps & marks to the frame as per the photographs. Framed to museum specifications using archival matting, backing, hinging. Bottle of wine pictured, is NOT included, just shown to give you an idea of scale. Frame Size Approx: 61cm wide x 72cm h.

There doesn't appear to be text on the verso of this one - however the pagination matches and it could be that this plate appeared at the end of a chapter and subsequently had no text following, even if it came from the second, the latest it could be is 1640 - but no later. Both came from the same source as the other I have listed, which is certainly a 1613 edition. Hence Id err on the side of it being a first edition, with the caveat of a potential 1640 print. BASIL BESLER (1561 - 1629). Altdorf, 1613, 1640, 1713 - 50.

Copper plate engravings with modern hand-color 374 plates. 21 ¼" to 21 ½" x 16" to 18". Hortus Eystettensis is without doubt one of the greatest flower books ever produced in any country. The first great florilegium, it is a landmark work in size and scope documenting pre-Linnaean botanical classification. The splendid stylization and aesthetics make it one of the most powerful botanical works ever produced.

Basil Besler, an apothecary of Nuremberg and botanist who managed the garden of Bishop Johann Conrad in Eichstatt, Germany, used it as an encyclopedic resource as the basis for Hortus Eystettensis, observing and depicting over a thousand flowers, representing 667 species. The Bishop's remarkable garden was one of the most extensive in Europe, containing a huge variety of European shrubs and flowering plants, as well as exotic specimens from Asia and the Americas. He endeavored to collect the new and exotic specimens arriving from far away lands. With the Bishop's patronage, Besler worked both as artist and publisher, directing a team of ten artists and engravers in creating 374 plates over a period of 16 years. Horticultural rather than botanical, it is the earliest pictorial record of flowers in a single garden.

Summer, Fall, Winter, and Spring each have their own sections. As the first large folio botanical, the plates depict over 1000 flowers, many of them exotics appearing for the first time. It would be decades before living examples of certain species were to be seen again. The Bishops' Eden fell into disrepair after his death and with the outbreak of the Thirty Years War suffered complete neglect. By 1633 the magnificent gardens had ceased to exist.

But they would not be forgotten. Besler's original drawings (most of which are housed in the University Library, Erlangen) took sixteen years to complete. Besler supervised a team of painters and engravers including Domenicus & Raphael Custos, Wolfgang Kilian (stepson of Domenicus), Levin & Friedrich von Huisen, Peter Ilelburch, Johann Leopold, Servaes Raeven, Heinrich Ulrich Heronimus Lederer, et al. This unparalleled group worked between 1608 and 1612 when the last plates went to the printer. The Bishop died on the 2nd of November 1612.

Printed in 1613, only three hundred copies were issued. However, the extensive information and generous depictions would be republished for over a century. For many years it was believed the copper plates on which they were engraved survived until 1817, when they were melted down by the Royal Mint in Munich. However, in 1998, during a reorganization of storage in Vienna's Albertina Graphic Collection, 329 of the original plates were found.

The whereabouts of the remainder remains a mystery. One hundred and fifty years before Linnaeus created his thorough system of classification, Besler's great florilegium represented an impressive early attempt to classify plants for the benefit of botanists, doctors and apothecaries.

Each plant is given a distinct and often descriptive Latin title, and related species are grouped together on the same plate, or over a series of plates. Almost all specimens are shown complete and accurately colored including delineations of their root systems.

There were under one dozen copies colored at the time of publication probably for royal or wealthy patrons. Several happily survive in museums and libraries. Today we use them as a basis for coloring.

While Besler's work is obviously motivated by a scientific impulse to document and describe a remarkable collection of species, the beautiful presentation and dramatic stylization of the illustrations also convey a sense of the visual grandeur of the Bishop's great garden. By 1633 the famous garden had become a vegetable plot. Ultimately, this renowned botanical achievement would be plowed under and lost for all time. All the more reason to revere Besler's dramatic endeavor. Each specimen is placed on the page with an artist's understanding of formal and spatial relations.

Most notable, the stylized depiction of foliage and root systems betrays a lively baroque sensibility, as the plants seem to dance across the page. The Besler "Florilegium" will hold forever in time a magnificent era of horticulture. Reference: Hortus Eystettensis: The Bishop's Garden & Besler's Magnificent Book.

The Besler Florilegium: Plants of the Four Seasons. This item is in the category "Art\Art Prints".london" and is located in this country: GB.