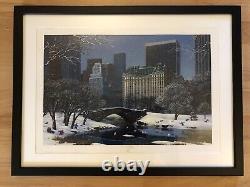 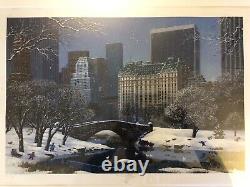 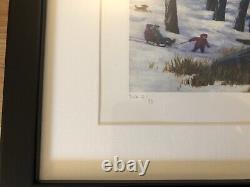 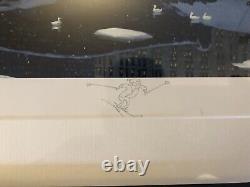 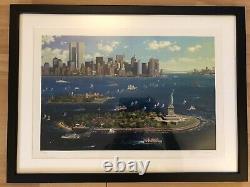 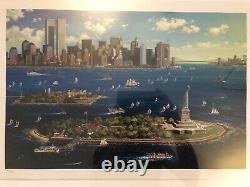 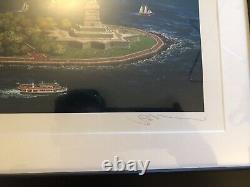 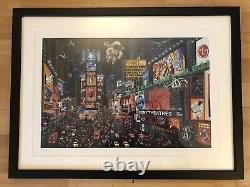 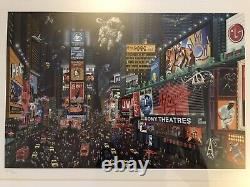 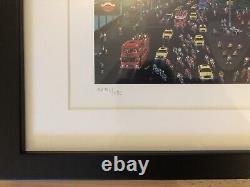 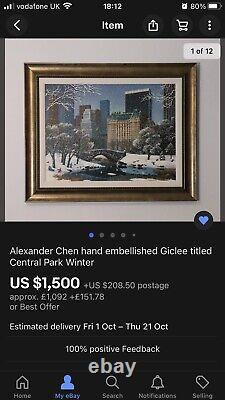 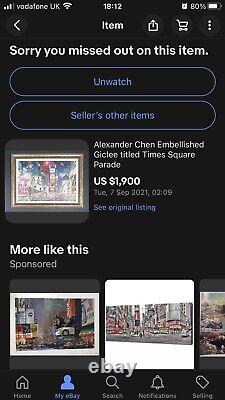 These are extremely high quality limited edition prints, painted in a hyper realistic style with incredible detail and use of colour! They are also embossed/raised/hand embellished print so they really do pop!

A must have for any NYC lover. Will hold their value and appreciate over the years. Unfortunately they do not have their certificates of authenticity, I never had them to begin with. These were a parting gift from a framing company I used to work for (possibly due to them not having the certificates).

There is minor damage to the edge of the frame on the Central Park picture, but can be repaired, touched up or reframed. The Central Park example pic is a larger edition number and not a deluxe edition, therefore less valuable! I really didn't think I'd struggle to sell these, they are awesome pictures, but, being a framer I have way too many framed artworks as it is! They are collection only as it's risky sending glazed pictures through normal couriers/post.

I can hand deliver locally for no extra cost, within reasonable distance of course. Please read below to learn more about the artist.

Alexander Chen an internationally acclaimed artist that paints in, what he calls, a "hyper-realist" style. He travels throughout the world, visiting historical and cultural landmarks, transporting his audience into the exciting settings of his paintings.

The streets of Paris, Times Square in New York, the Great Wall of China, the London Bridge, and the Grand Canyon are some of the locations that have inspired his paintings. Chen is grateful that he was afforded the opportunity to experience many different cultures during his life. Born in the hot and humid city of Guangzhou, China in 1952, Chen first discovered his love of art while developing a series of drawings at the age of 4. He continuously nurtured his talent and vision as his life went through tumultuous change.

When he was 16, Chen read "Around the World in 80 Days" and was struck with the urge to travel. Walking and biking, Chen journeyed as far as he was able to document his surroundings. At 16 he moved to the countryside where, as a farmer, Chen learned to love the land and became in awe of its splendor. By the time he was 26, Alexander began studying at various art schools and colleges in China, including the Arts and Crafts School at Guang Dong and the Guangzhou Academy of Fine Arts.

In addition to learning more about his craft, Chen met and married a fellow student and artist, Su. They have one son named Brandon. As he traveled throughout China during the 1980s, Chen quickly developed a reputation as an upcoming young artist. His paintings were collected by provincial and national art museums and were selected for display by the National Art Exhibitions of China.

In the late 1980s, Alexander Chen moved his family to San Francisco. Growing up in such a warm climate and then moving to California, it wasn't until Chen was 40 years old that he saw his first snowfall, standing in the middle of Central Park. This experience profoundly affected his art from then on.

Since then, he has created a series titled "Alexander's World, " based on modern life in his beloved adopted country, the United States. The exciting cityscapes of life in New York, New Orleans, Miami, Las Vegas, Los Angeles, San Francisco and Chicago have become very popular as are his heart-rending tributes to American landmarks and icons such as the Grand Canyon, Yosemite Park, The Statue of Liberty and Times Square. Each painting can take up to three months to complete, becoming a part of his "Collectible Memories" - the way Chen gives back to his "adopted land" of America.

Going further than being memories, Chen wants his paintings to document the world we live in today, attempting to show a hand-made rendition of our lives for the future. When Chen paints, he uses a "hyperrealist" style, documenting every person, window, stoplight, and advertisement he sees in front of him. As preparation for his work, Chen will take hundreds of photos.

He recalls that, in his studio, he has more than ten hard drives to back up his photography. Inspired by the artists of the Song Dynasty and the way they could capture 1,000 people in each painting, Chen can take up to three months to unearth so much detail in each of his works. In fact, his paintings are so detailed that he's only completed around 600 original acrylic or oil paintings in his time as an artist - a minuscule number in comparison to many of his contemporaries. Alexander has traveled to over 50 countries researching material for his paintings, including Europe, the Mideast, and Southeast Asia in search of new locations to add to his inspired collection of artwork. He has captured scenes from daily life in England, France, Italy, Greece, Turkey, Egypt, Germany, China, and Thailand.

In his paintings, Alexander portrays an exotic yet playful side of life in every location he visits. When asked if he has a favorite location to paint, Chen describes a mixture of love for his hometown in China and his new home of San Francisco. He also enjoys travelling to Mykonos and the Greek islands, examining the classical buildings and beautiful coastlines.

Since Chen has matured, he's begun to focus less on his "hyperrealist" details that feature locations like Times Square and more on the grand landscapes of the world. While equally magnificent, settings like the Grand Canyon contain fewer details than the cityscapes of Las Vegas and London, giving his eyes a rest.

While Chen spends more than 10 hours each day in his studio, he listens to ancient Chinese music, listens to his television ("not watches, " he says) and has recently begun to experiment with new media, such as etching with a diamond pen. Alexander is an official Artist for the U. He created originals for both the Beijing 2008 Summer Olympics and the Vancouver 2010 Winter Olympics. He has the distinguished honor of being the only Olympic Artist sanctioned by both the U. Olympic Committee and the Beijing Olympic Committee.

From his home in California, Chen enjoys the beauty and opportunity provided to him as an American. Chen is honored that people of all ages and backgrounds collect his artwork, regardless of medium - his painting, graphic work or something as simple as a puzzle. Alexander states, It is the same ocean and sky that connects me with my homeland of China with my adopted land of America.

I love both places and that is clearly reflected in my artwork. Chen has also expressed that he feels incredibly thankful to have the opportunity to meet his collectors with Park West, feeling at home in his surroundings no matter where he is in the world. He has been on more than 35 cruises with Park West as a featured artist.

He is moved and inspired by the feedback he receives from his collectors and feels that these firsthand experiences are most important. Chen's works of art have been collected or licensed by companies including Toshiba Electric, Northwest Airlines, UNICEF and various art trade magazines.

Alexander Chen has received worldwide recognition for his colorful and exciting works of art as his popularity in the United States, Asia, and Europe continues to grow. This item is in the category "Art\Art Prints".

The seller is "el_marko_of_england" and is located in this country: GB. This item can be shipped to United Kingdom.