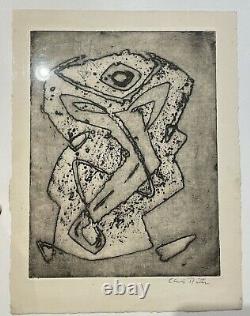 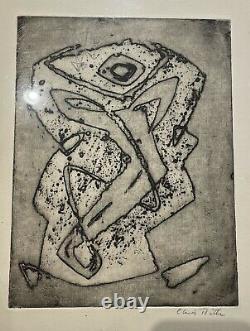 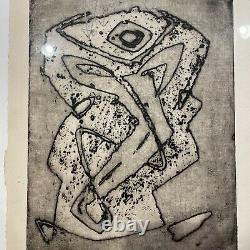 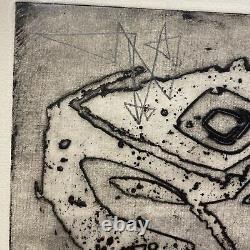 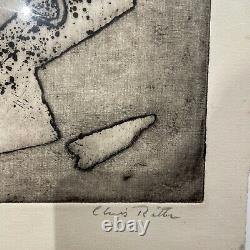 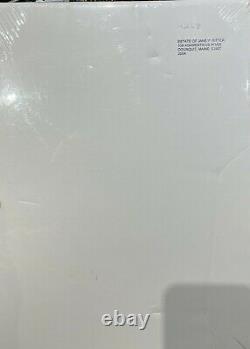 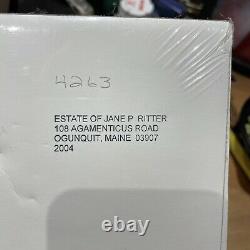 Chris Ritter Original Monotype With Pencil Drawing. Signed with Estate Stamp on Back. New York Abstract School 1950's. Chris Ritter's widow, Jane Ritter, passed away in 2006, her estate included a virtual time capsule of her late-husband's work. And not seen since his death thirty years earlier.

This work passed through the 2006 Jane Ritter estate. It was likely made at Chris Ritter's Ogunquit Maine studio. This is an original monotype with drawing that is signed.

The work is not numbered because it is an original work. Overall dimensions are is 9 1/4"X 12". Chris Ritter, painter, printmaker, educator, and gallerist, was born on 9 December 1906 (most sources incorrectly cite 1908) in Iola, Kansas.

He graduated with a B. From the University of Kansas at Lawrence where he was a pupil of Albert Bloch and Karl Mattern. He continued his studies at the Art Students' League in New York from 1933-36 with Richard Lahey and George Grosz. Ritter also studied at Columbia University and at the Brooklyn Museum School of Art.

During World War II, he was an illustrator for the Air Force while serving in the army. Ritter became an important figure in the New York Postwar Avant-Garde scene.

He opened the Laurel Gallery in New York at 108 East 57th Street in 1946 and began exhibiting works by avant-garde artists. In 1947 he mounted a show for artist Grace Borgenicht who became the Laurel Gallery co-director. Like View Magazine, with which he seems to have been in some way associated, Ritter's work and his gallery explored the Surrealist sensibility transplanted from Europe and given new life as it came into contact with popular culture in the United States. The gallery published four "Laurels Portfolios" of prints, many of which were done by artists working in New York at S. Ritter closed the Laurel Gallery in 1952 and Borgenicht opened a gallery on her own.

The Grace Borgenicht Gallery opened on 57th Street in May 1951, with a show of Max Ernst's work. She continued to represent most of the artists that Laurel had worked with. Ritter was also an instructor of art at Hunter College in New York City from 1939-41; at Cornell University in Ithaca, New York in 1947; at Ballard School from 1947-53; and in Texas at the Midland Center for the Arts in 1954. He and his wife Jane retired to Ogunquit, Maine. Ritter was a member of the Ogunquit Art Association and served as president from 1957 to 1961.

Chris Ritter's work is represented in the British Museum, the Brooklyn Museum, the Art Institute of Chicago, the Georgia Museum of Art, the Library of Congress, the New York Public Library, Smithsonian Archives of American Art, the Whitney Museum of American Art, and the Worcester Art Museum. Chris Ritter died on 8 August 1976 in Ogunquit, Maine. This item is in the category "Art\Art Prints". The seller is "milut_72" and is located in this country: US.