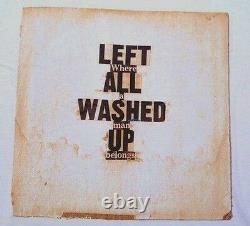 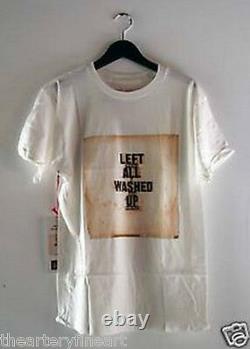 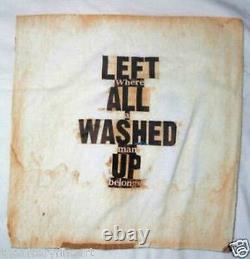 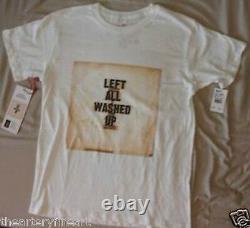 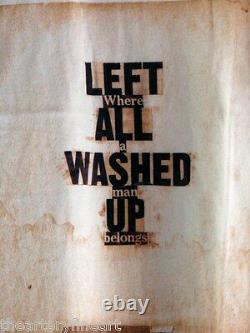 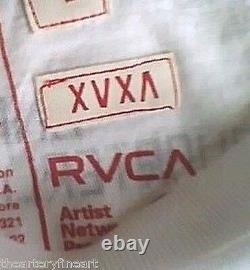 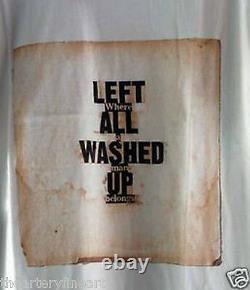 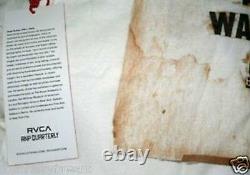 Untitled (Left All Washed Up)', 2006/2008. LIMITED EDITION RVCA ANP T-Shirt. Silkscreened vintage white 100% organic cotton t-shirt. Size: SMALL Men's / Unisex. 20" armpit-to-armpit, 27" back length. BRAND NEW with original tags. THE RVCA ARTIST NETWORK PROGRAM, COMMONLY REFERRED TO AS THE ANP, IS AN ONGOING PROGRAM WHICH AIMS TO SHOWCASE THE TALENT OF ACCOMPLISHED, AS WELL AS UNKNOWN, ARTISTS WHO INSPIRE OUR GENERATION AND PUSH THE BOUNDARIES OF CREATIVITY; PROVIDING SOMETHING OF SUBSTANCE AND CULTURE. TO RVCA, AN ARTIST IS NOT SOMEONE WHO JUST PAINTS A PICTURE, OR WRITES A SONG, BUT SOMEONE WHO IS DEDICATED TO SHARING WITH THE WORLD THEIR LIFE, EMOTIONS AND SOUL THROUGH INNOVATIVE AND CREATIVE IDEAS. RVCA AND THE ANP WERE DEVELOPED TO SHAKE THE VERY FOUNDATIONS OF THE BUSINESS, BY GIVING BACK TO THE ARTISTS AND PROVIDING A VOICE FOR THEIR CREATIVE GROWTH. Dash Snow was an artist based in New York City best known for his sculptural installations, collages, and photographs. Snow has exhibited in galleries and museums such as The Royal Academy in London, the Whitney Museum of American Art's 2006 Biennial " Day For Night ", Deitch Projects, NY, Saatchi Gallery, London and Nicole Klagsbrun Gallery, NY. Snow is the great-grandson of Dominique de Menil, and his mother, Taya Snow, is the daughter of Robert Thurman (and the half-sister of actress Uma Thurman) and Christophe de Menill. Snow ran away from home and began living on the streets at 13 or 14, and began taking photographs, he says, as a record of places he might not remember the next day. Snow's photographic work is in a thematically similar mode to photographers Nan Goldin, Larry Clark, Ryan McGinley and Richard Billingham, often depicting scenes of a candid or illicit nature.

Instances of sex, drug taking, violence and art-world pretentiousness are documented with disarming frankness and honesty, offering insight into the decadent lifestyle increasingly associated with young New York City artists and their social circles. Some of Snow's recent collage-based work has been characterized by the controversial practice of using his own semen as a material applied to or splashed across newspaper photographs of police officers and other authority figures. However, the suggestive nature of such works has not prevented them from being acquired by influential collectors such as Charles Saatchi. Dash Snow, a promising young New York artist, died on July 13, 2009, at Lafayette House, a hotel in Lower Manhattan.

He was 27 and lived in Manhattan. His death was confirmed by his grandmother, the art collector and philanthropist Christophe de Menil, who said that Mr. Snow had died of a drug overdose. Snow gained prominence after being featured in an article titled " Warhols Children " that appeared in New York magazine in 2007. He worked in video and photography and also developed a distinctive collage style that fused and contrasted found images in fresh and suggestive ways. He exhibited in galleries and museums in New York, Los Angeles and Europe. 2019' The Drowned World: Selections from the Dash Snow Archive', PARTICIPANT INC.

2005' Dash Snow: Moments Like This Never Last', Rivington Arms, New York, NY. PLEASE SEE MY OTHER AUCTIONS BY CLICKING MY. The item "DASH SNOW x RVCA'Left All Washed Up', 2008 T-Shirt S Limited Edition RARE NWT" is in sale since Wednesday, April 13, 2016. This item is in the category "Clothing, Shoes & Accessories\Men\Men's Clothing\Shirts\T-Shirts".

The seller is "thearteryfineart" and is located in Miami, Florida. This item can be shipped worldwide.