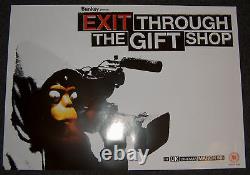 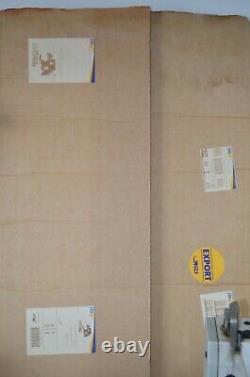 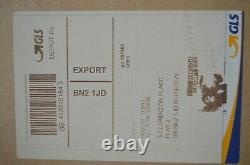 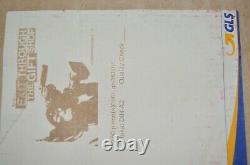 NOT SEEN THIS EDITION BEFORE, MAY BE QUITE RARE. NO TEARS FOLDS OR CREASES, VERY CLOSE TO AS MINT AS THE DAY IT WAS PRINTED!

We had weather damage to our workshop in 2013 and some dampness has affected these rare posters, not highly visible, hardly noticeable but no longer mint! THESE WERE DESTINED TO BE FLY POSTED BUT THE BUILDING THEY WERE IN WAS CONDEMNED, I HAD A UNIT NEXT DOOR AND SAVED THESE OVER TEN YEARS AGO, I ALSO KEPT THE ORIGINAL PACKAGING AS SEEN IN THE PHOTO'S AS PROVENANCE TO AUTHENTICITY. ONCE GONE THAT WILL BE THE LAST OF THEM OFFERED! THESE ARE THE LAST ONES IN THIS CONDITION AND ONCE GONE WILL NO LONGER BE AVAILEABLE. BELOW ARE WIKI DESCRIPTION OF THE MOVIE.

DUE TO A FEW QUESTIONS REGARDING AUTHENTICITY I HAVE NOW UPLOADED IMAGES OF THE ORIGINAL PACKAGING THESE CAME IN DATED 19th FEB 2010. Exit Through the Gift Shop: A Banksy Film is a film directed by Banksy.

That tells the story of Thierry Guetta. A French immigrant in Los Angeles. And his obsession with street art. The film charts Guetta's constant documenting of his every waking moment on film, from a chance encounter with his cousin, the artist Invader. To his introduction to a host of street artists with a focus on Shepard Fairey.

And Banksy, whose anonymity is preserved by obscuring his face and altering his voice, to Guetta's eventual fame as a street artist himself. The film premiered at the 2010 Sundance Film Festival. It is narrated by Rhys Ifans. The music is by Geoff Barrow. S "Tonight The Streets Are Ours". The film was nominated for the Academy Award for Best Documentary Feature. At the 83rd Academy Awards. ANY QUESTIONS PLEASE DON'T HESITATE TO ASK. The item "Exit Through the Gift Shop A2 film poster Banksy banksey rare limited amount" is in sale since Sunday, September 3, 2017. This item is in the category "Art\Art Posters".

The seller is "poisonclothing" and is located in brighton, East Sussex. This item can be shipped worldwide.