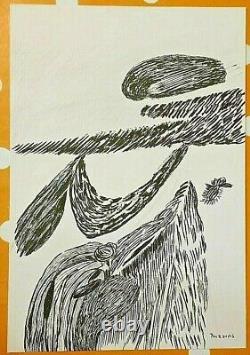 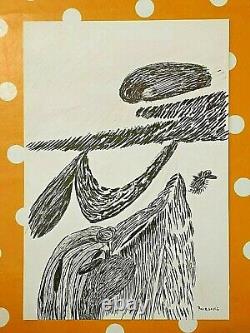 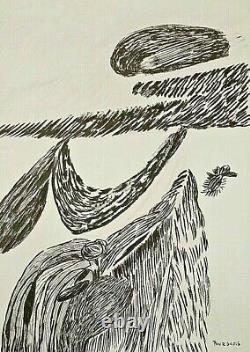 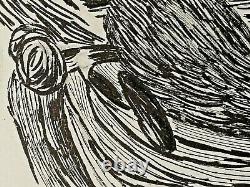 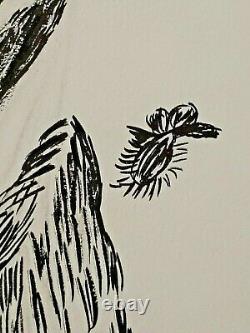 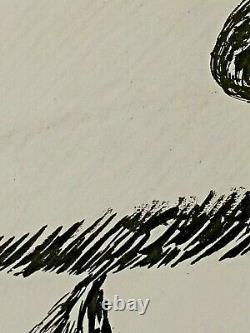 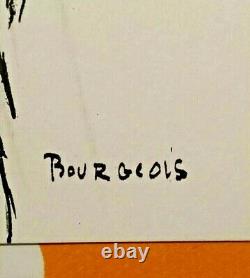 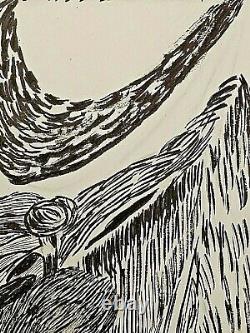 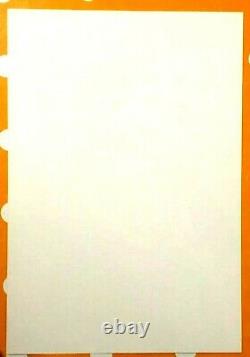 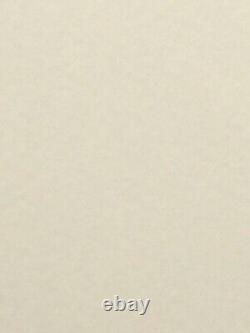 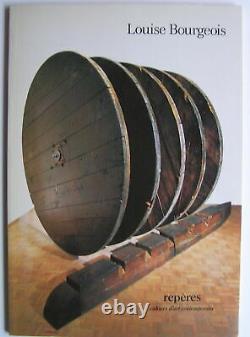 LITHOGRAPHIE ORIGINALE de LOUISE BOURGEOIS (Signed in the plate). Edition : provenance Reperes Galerie Lelong (see last photo for illustration - not included in sale). Dimensions : 21.5 x 31 cm. One of the editions of this print can be found in the MoMA collection, New York.

Louise Joséphine Bourgeois (25 December 1911 - 31 May 2010) was a French-American artist. Although she is best known for her large-scale sculpture and installation art, Bourgeois was also a prolific painter and printmaker. She explored a variety of themes over the course of her long career including domesticity and the family, sexuality and the body, as well as death and the subconscious.

These themes connect to events from her childhood which she considered to be a therapeutic process. Although Bourgeois exhibited with the Abstract Expressionists and her work has much in common with Surrealism and Feminist art, she was not formally affiliated with a particular artistic movement. Bourgeois was born on 25 December 1911 in Paris, France.

She was the second child of three born to parents Joséphine Fauriaux and Louis Bourgeois. She had an older sister and a younger brother.

Her parents owned a gallery that dealt primarily in antique tapestries. A few years after her birth, her family moved out of Paris and set up a workshop for tapestry restoration below their apartment in Choisy-le-Roi, for which Bourgeois filled in the designs where they had become worn.

The lower part of the tapestries were always damaged which was usually the characters' feet and animals' paws. In 1930, Bourgeois entered the Sorbonne to study mathematics and geometry, subjects that she valued for their stability, saying I got peace of mind, only through the study of rules nobody could change. Her mother died in 1932, while Bourgeois was studying mathematics. Her mother's death inspired her to abandon mathematics and to begin studying art.

She continued to study art by joining classes where translators were needed for English-speaking students, in which those translators were not charged tuition. In one such class Fernand Léger saw her work and told her she was a sculptor, not a painter. Bourgeois took a job as a docent, leading tours at the Musée de Louvre.

Bourgeois graduated from the Sorbonne 1935. She began studying art in Paris, first at the École des Beaux-Arts and École du Louvre, and after 1932 in the independent academies of Montparnasse and Montmartre such as Académie Colarossi, Académie Ranson, Académie Julian, Académie de la Grande Chaumière and with André Lhote, Fernand Léger, Paul Colin and Cassandre. Bourgeois had a desire for first-hand experience, and frequently visited studios in Paris, learning techniques from the artists and assisting with exhibitions. Bourgeois briefly opened a print store beside her father's tapestry workshop. Her father helped her on the grounds that she had entered into a commerce-driven profession.

Bourgeois emigrated to New York City in 1938. She studied at the Art Students League of New York, studying painting under Vaclav Vytlacil, and also producing sculptures and prints. The first painting had a grid: the grid is a very peaceful thing because nothing can go wrong...

There is no room for anxiety... Everything has a place, everything is welcome.

Bourgeois incorporated those autobiographical references to her sculpture Quarantania I, on display in the Cullen Sculpture Garden at the Museum of Fine Arts, Houston. One theme of Bourgeois's work is that of childhood trauma and hidden emotion. After Louise's mother became sick with influenza Louise's father began having affairs with other women, most notably with Sadie, Louise's English tutor. Louise was extremely watchful and aware of the situation.

This was the beginning of the artist's engagement with double standards related to gender and sexuality, which was expressed in much of her work. She recalls her father saying "I love you" repeatedly to her mother, despite infidelity.

He was the wolf, and she was the rational hare, forgiving and accepting him as he was. " Her 1993 work "Cell: You Better Grow Up", part of her "Cell series, speaks directly to Louise's childhood trauma and the insecurity that surrounded her. 2002's "Give or Take" is defined by hidden emotion, representing the intense dilemma that people face throughout their lives as they attempt to balance the actions of giving and taking. This dilemma is not only represented by the shape of the sculpture, but also the heaviness of the material this piece is made of.

Architecture and memory are important components of Bourgeois's work. In numerous interviews, Louise describes architecture as a visual expression of memory, or memory as a type of architecture.

The memory which is featured in much of her work is an invented memory - about the death or exorcism of her father. The imagined memory is interwoven with her real memories including living across from a slaughterhouse and her father's affair. To Louise her father represented injury and war, aggrandizement of himself and belittlement of others and most importantly a man who represented betrayal.

Her 1993 work "Cell (Three White Marble Spheres)" speaks to fear and captivity. The mirrors within the present an altered and distorted reality.

Sexuality is undoubtedly one of the most important themes in the work of Louise Bourgeois. The link between sexuality and fragility or insecurity is also powerful. It has been argued that this stems from her childhood memories and her father's affairs.

1952's "Spiral Woman" combines Louise's focus on female sexuality and torture. The flexing leg and arm muscles indicate that the Spiral Woman is still above though she is being suffocated and hung. 1995's "In and Out" uses cold metal materials to link sexuality with anger and perhaps even captivity. The spiral in her work demonstrates the dangerous search for precarious equilibrium, accident-free permanent change, disarray, vertigo, whirlwind. There lies the simultaneously positive and negative, both future and past, breakup and return, hope and vanity, plan and memory.

Louise Bourgeois's work is powered by confessions, self-portraits, memories, fantasies of a restless being who is seeking through her sculpture a peace and an order which were missing throughout her childhood. Please look at my other items including rare modern and contemporary art and design pieces. This item is in the category "Art\Art Prints". The seller is "ashbinx74" and is located in this country: GB. This item can be shipped worldwide.