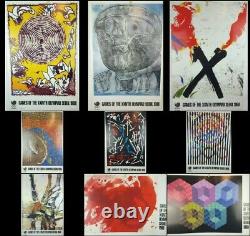 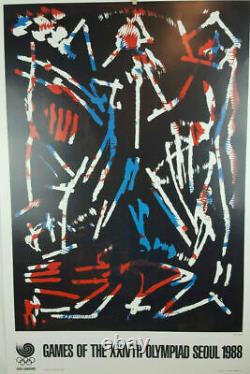 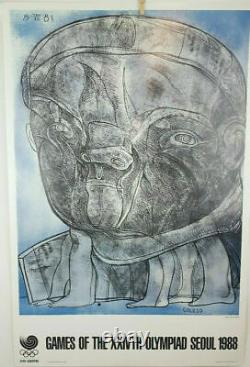 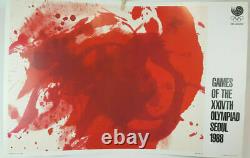 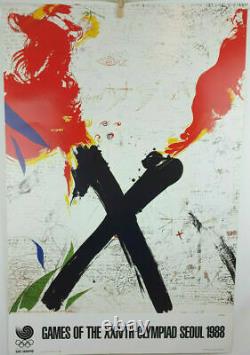 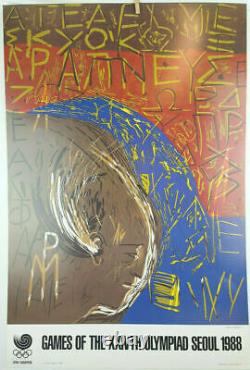 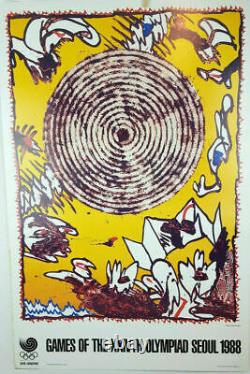 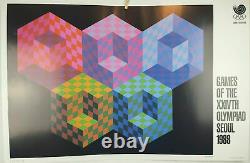 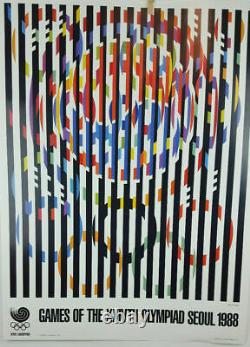 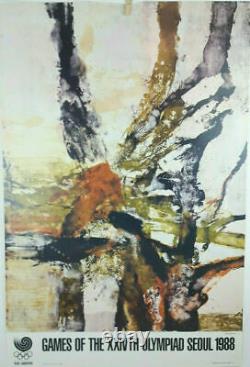 Rare and Vintage 1988 Seoul Olympic Posters Set of 9 - Ships in Tube. Lloyd Shin was given the responsibility for finding various artists all over the world to create the images to be used in these 1988 Olympic posters.

These posters were found in a large box from the Lloyd Shin Gallery. The posters are in fantastic condition for being over 30 years old. Posters measure 24'' x 36'' and are of paintings done by the following artists.

Artist: Lee Bann - Title: "Let's make the whole demilitarized zone in a grand park for all Korean people and an olympeace park". 1940 - is a contemporary Korean artist best known for his DMZ art and culture movement.

He is a painter whose active involvement in exhibitions and symposiums have sparked attention and participation from other artists. For Ban, the focus of his art concerns the issue of overcoming division, which derives from his own father? S defection to North Korea. Artist: Jose Luis Cuevas - Title "Coloso". Artist: Yaacov Agam - Title: Message of Peace?

Yaacov Agam (1928-) is an Israeli sculptor and experimental artist best known for his contributions to optical and kinetic art who pioneered a new form of art that contemplates progress, time, and the role of the viewer. Agam has become one of the most influential modern artists since his first solo exhibition in 1953. Artist: Victor Vasarely - Title: Olympia? His work entitled Zebra, created by Vasarely in the 1930s, is considered by some to be one of the earliest examples of Op-art. Vasarely died in Paris in 1997.

His work is related to tachisme, abstract expressionism, and lyrical abstraction. In 1949 he joined Christian Dotremont, Karel Appel, Constant, Jan Nieuwenhuys and Asger Jorn to form the art group Cobra. He participated both with the Cobra exhibitions and went to Paris to study engraving at Atelier 17 under the guidance of Stanley William Hayter in 1951. Artist: Mimmo Paladino - Title: "Olympia". Mimmo Paladino (1948-) is an Italian Transavantgarde sculptor, painter, and muralist. Born on December 18, 1948 in Paduli, Italy, His early painting Cordoba (1984), a portrayal of two semi-abstracted figures tussling in a courtyard, has become one of his best-known images. Paladino was showcased at the 1980 Venice Biennale for its Transavantgarde-specific exhibition, and that same year, he had two solo exhibitions in New York. More recently, he garnered attention for his large-scale public installations, including The Salt Mountain (2010), a large white mound strewn with sculptures of horses lying on their sides. He has shown work worldwide, including the Hirshhorn Museum and Sculpture Garden in Washington, D. And the Tate Modern in London. He lives in Rome, Italy. Artist: Kazuo Shiraga - Title: "Passionate Winner".

2008, Amagasaki, Japan was a Japanese modern artist and prominent member of the Gutai group. Being the first radical, post-war artistic group in Japan, Gutai was founded in 1954. Shiraga is best known for his performative painting practise and he was strongly influenced by American Abstract Expressionism. S death this artist was widely internationally acknowledged. S works are included in the numerous important collections such as the Hara Museum of Contemporary Art in Tokyo, the Dallas Museum of Art, and Gutai featured in a survey show at the Guggenheim in New York in 2013 and at the 2009 Venice Biennale.

Penck, who also used the pseudonyms Mike Hammer, T. Mickey Spilane, Theodor Marx, a. " or just "Y 5 October 1939? 2 May 2017 was a German painter, printmaker, sculptor, and jazz drummer. A neo-expressionist, he became known for his visual style, reminiscent of the influence of primitive art. Artist: Zao Wou-Ki - Title: Tree of Life? Zao Wou-Ki (1921- 2013) was a Chinese-French artist known for his non-representational paintings that blended Eastern and Western modes of art making.

Everybody is bound by a tradition. Born on February 1, 1920 in Peking, China, he studied at the Hangzhou Fine Arts School for six years were he was influenced by the work of traditional Chinese and Japanese art as well as Western painters like Paul Klee and Franz Kline.

In 1947, the artist moved to Paris where he became the neighbor of Alberto Giacometti and friends with Sam Francis, Jean-Paul Riopelle, and Pierre Soulages. During the following decades, Zao? The artist died on April 9, 2013 in Nyon, Switzerland at the age of 93.

In 2016, he was the subject of his first retrospective held in the United States titled? At the Asia Society in New York. S works are in the collections of the Tate Gallery in London, The Museum of Modern Art in New York, and the National Gallery of Art in Washington, D. The item "Rare and Vintage 1988 Seoul Olympic Posters Set of 9" is in sale since Wednesday, August 19, 2020. This item is in the category "Art\Art Posters". The seller is "bargainseeking" and is located in Palatine, Illinois. This item can be shipped worldwide.