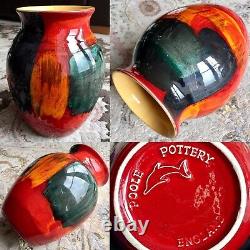 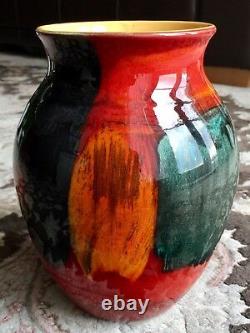 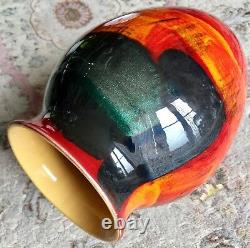 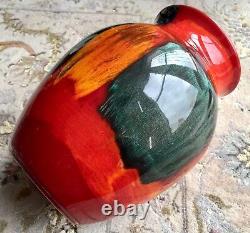 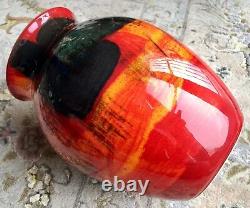 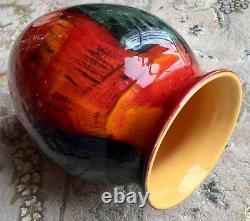 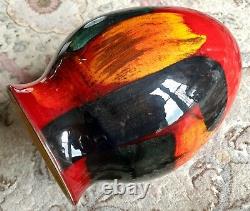 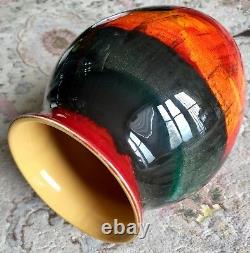 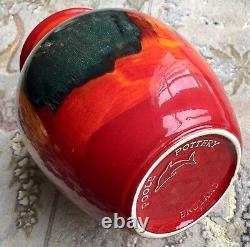 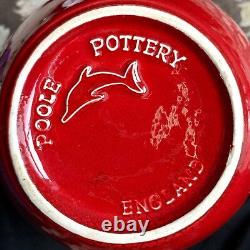 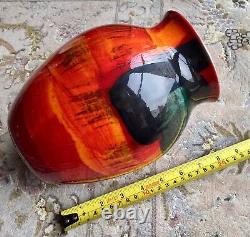 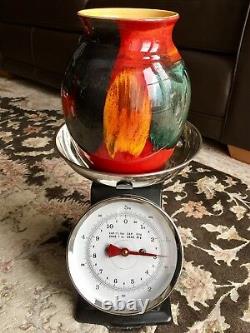 Superb Rare Collectable Anita Harris Poole Pottery 8/20cm Tall Vase In Perfect Condition. Please browse all 12 photographs for size, weight and condition as they are self explanatory. As a company, it was founded in 1873 on Poole quayside, where it continued to produce pottery by hand before moving its factory operations away from the quay in 1999. Production continued at a new site in Sopers Lane until its closure in 2006. Historical products from Poole Pottery are displayed in the Victoria and Albert Museum in London.

The pottery has recently restarted production at its new factory in Burslem, Staffordshire, and the Poole Quay pottery studio and shop has reopened. Poole Pottery was originally "Carter's Industrial Tile Manufactory" and it was this company that provided the financial foundation for the later "Poole Pottery". Carter (Jesse) joined forces in the 1920s with designers Harold Stabler and Phoebie Stabler, and potters John Adams and Truda Adams (Truda Carter) to form "Carter Stabler Adams", who produced Art Deco pottery. The Carter company produced much of the ceramic tiling used on London Underground stations built in the 1930s and, of particular note, made the relief tiles, designed by Stabler, showing symbols of London-some of these can still be seen on stations such as Bethnal Green.

"Carter Stabler Adams" eventually became "Poole Pottery", and during and after World War II produced many lines, including Twintone and Traditional. Much of the traditional range was based on the work of the chief designer in the 1920s, Truda Carter; her original designs were interpreted by "paintresses" who added their own individuality to the pieces, all of which were handmade. Robert Jefferson joined in the 1950s, and alongside such artisans as Leslie Elsden (designer of the "Aegean" Range), Guy Sydenham, thrower and designer of the "Atlantis" range, Tony Morris, developer of the early "Delphis" Studio wares with Jefferson, and paintresses such as Carol Cutler, Diana Davies, Ros Sommerfeld, Ann Godfrey and others, including the three Wills sisters, Laura, Julia and Carolyn, produced two lines which are probably the most famous of all Poole's output: Delphis and Aegean. Delphis is easily recognised: it is psychedelic, with vibrant colours and designs inspired by artists such as Mondrian, Warhol, Matisse and Pollock.

Aegean is more subtle, with the sgraffito technique used to create the "silhouette" patterns that make this range so recognisable. A new company trading as Poole Pottery was later formed and produced many of the old designs and styles of the original pottery. Anita Harris was head designer at Poole Pottery for 10 years, and brought with her to Stoke on Trent an extensive knowledge in reactive glazes. Anita has designed for several world renowned brands and eminent international stores has an ever growing following of passionate collectors in the UK and overseas. This item is in the category "Pottery, Ceramics & Glass\Decorative Pottery, Ceramics & Glass\Vases".

The seller is "santoor-uk" and is located in this country: GB. This item can be shipped worldwide.