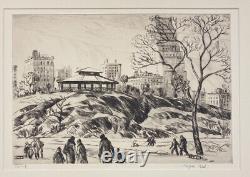 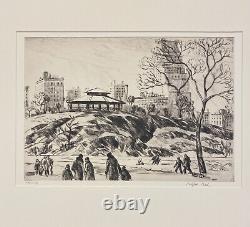 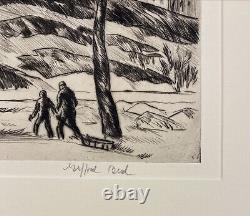 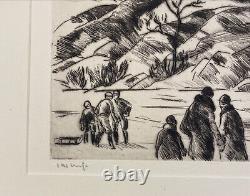 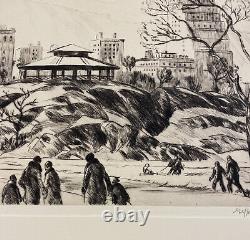 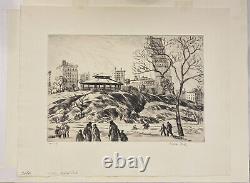 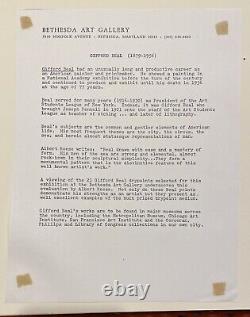 Image: 20.8 × 30.2 cm 8 3/16 × 11 7/8 in. Other impressions of this scarce print are in the New-York Historical Society and the Phillips Collection, Washington DC. This one has labels from the Bethesda Art Gallery with a label and biography on back of archival mount. Gifford Beal, painter, etcher, muralist, and teacher, was born in New York City in 1879.

The son of landscape painter William Reynolds Beal, Gifford Beal began studying at William Merritt Chase's Shinnecock School of Art (the first established school of plein air painting in America) at the age of thirteen, when he accompanied his older brother, Reynolds, to summer classes. He remained a pupil of Chase's for ten years also studying with him in New York City at the artist's private studio in the Tenth Street Studio Building. Later at his father's behest, he attended Princeton University from 1896 to 1900 while still continuing his lessons with Chase.

Upon graduation from Princeton he took classes at the Art Students' League, studying with impressionist landscape painter Henry Ward Ranger and Boston academic painter Frank Vincent DuMond. He ended up as President of the Art Students League for fourteen years, a distinction unsurpassed by any other artist. His student days were spent entirely in this country.

"Given the opportunity to visit Paris en route to England in 1908, he chose to avoid it" he stated, I didn't trust myself with the delightful life in ParisIt all sounded so fascinating and easy and loose. " His subjects were predominately American, and it has been said stylistically "his art is completely American. Gifford achieved early recognition in the New York Art World.

He became an associate member of the National Academy of Design in 1908 and was elected to full status of academician in 1914. He was known for garden parties, circuses, landscapes, streets, coasts, flowers and marines. This diversity in subject matter created no typical or characteristic style to his work.

Beal's style was highly influenced by Chase and Childe Hassam, a long time friend of the Beal family who used to travel about the countryside with Beal in a car sketching local sights. Both Hassam and Chase were famous for their impressionist views of New York City and Connecticut and Long Island coastlines. Beal's early work reflects his acquaintance with these painters and focused on the city's commercial and industrial growth.

"Beal's major influence, however, remained Chase, whose "greatness" Beal attributed to the "sheer fullness of his naturehis store of energy, and his dedication to the profession of painting. "When the story of American art is finally told, " Beal predicted, Chase's name will be high on the list of the great.

Regarding his use of color, one art critic wrote: On the whole he is inclined toward color that is rich and strong. The garden scenes have masses of deep and gleaming foliage over the gay scenes below. The circus pictures are resplendent in hue. He takes the rich green that crowns the cliffs at Montauk and with it gives depth and richness to their tawny sides.

The ocean in Sword Fisherman is an intense blue, neither light nor dark, and full of almost imperceptible shadings. Beal found early success with his views of the Hudson Valley where his family had an estate called Willellen in Newburgh, overlooking the Hudson River.

A gifted technician and draftsman Beal did considerable mural painting including seven panels portraying the life of scientist John Henry; North Country and Tropical Country, Department of the Interior building, Washington, D. Renewing an early interest for the sea, a subject he had favored during his student years, Beal started to achieve recognition for his marine landscapes. In 1921 he began spending most of his summers on the Massachusetts coast, first at Provincetown and then at Rockport. Both he and his brother Reynolds had a strong attraction to the sea.

In the 1940's, Beal, never one to rest on his laurels made a dramatic stylistic change, his painting technique became freer as he replaced naturalistic perspective with an intricately patterned and flattened picture plane. " These "more decorative works echoed ancient Persian paintings as well as the work of Maurice and Charles Prendergast whose art Beal greatly admired.

In the end he adopted a "less objective" style that was high key and utilizing softer edges. This new work was said to be influenced by Raoul Dufy. However many influences one may choose to cite in Beal's work this is secondary to the fact that Gifford Beal throughout his artistic career derived a strongly personal statement in his art that was fundamentally sound and aesthetically pleasing. Louis Exposition (medal) 1904; Armory Show, 1913; Corcoran Gallery, Washington, DC; Panama Pacific Exposition, (medal) 1915; Society of Independent Artists, 1917; Kraushaar Galleries; International Exposition, Paris; Carnegie Institute; Retrospective Exhibition, Century Club, NY; San Francisco Museum; San Joaquin Museum; Des Moines Art Center; Butler Institute; Scripps College; American Academy of Arts and Letters; Phillips Collection; Montclair Art Museum and others. He was a member of the American Academy of Arts and Letters, the American Institute of Arts and Letters, the Architectural League of America, and the National Society of Mural Painters.

His work can be found in numerous museums and public collections across the country. Gifford Beal passed away on Feb. 5th 1956 at the age of seventy-five in New York City.

This item is in the category "Art\Art Prints". The seller is "museumcoin" and is located in this country: US.