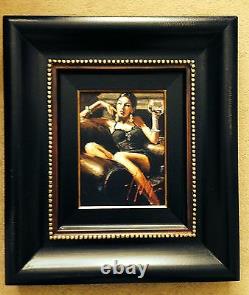 ORIGINALS by Fabian Perez RARELY come onto the OPEN market! His originals can steadily increase in value by 10- 15 % a year. Measurements;height 12 in x 9 in.

Invest in one of our paintings, rather than risky bank investments, where you can actually touch your investment. Take pleasure in looking at it and watch it appreciate in value over the years!!

G only one of it's kind in the world!!! Scarcity alone guarantees the investment!!!! Art has long been regarded as a strong and safe investment. Investment in paintings was discussed recently on Bloomberg television as a sound investment as a hard asset like Gold, Platinum Silver etc.

Go to Latest Art news on Asgard Arts and see Hang your investments on the wall by Ellen Kelleher Published October 22 2010 in the Financial Times. A Biography of Fabian Perez. For Fabian Perez, the purpose of art is to perpetuate beauty. God created the world and embellished it with the wonders of nature.

I think it is the artists job to embellish it with his work. Pausing, he says, I would like to say that it is not important what you have, but how you enjoy it.

Born in 1967 in Buenos Aires, Argentina, Fabian had a difficult childhood. His father owned bordellos and nightclubs that were illegal. He also was a gambler. To this day, Fabian remembers the police coming to their home looking for his father who would try to escape through the back door. So many times he went to jail. I remember when I was very young going to police stations and looking for him. Eventually his father gave up the business, lost everything and lapsed into depression. Meanwhile, Fabians mother, who was artistic herself, encouraged her son to develop his aptitude for art.

From an early age he loved to draw and she would proudly display these endeavors. He was also passionate as a boy about soccer and martial artsthe latter becoming an integral part of his life and his work as an artist. I remember at the age of 11 quitting my first class because there was a World Cup soccer match.

I did not take art classes in school, or even finish high school, but when the teachers wanted a drawing of, say, an Argentine hero, they always came to me. As a young adult, he did decide to take a few art courses to learn more about the true craft of drawing and painting, but it was never formal training. It is imagery from his past that he draws from in his painting, his father his inspiration.

He is the cool guy outside the nightclubs and bordellos in Fabians images. And the women are his memories of those he saw at his fathers brothels and nightclubstheir somber mood, brooding thoughts and intense sensuality emanating from his canvases. For several years after his parents died, his mother when he was 16, his father when he was 19, he lived as a gypsy. The sadness and despair he experienced left him confused and searching for answers. It was in martial arts that he found an inner strength.

He immersed himself in the discipline. Alone and struggling to take care of himself, he began to teach karate while living in martial arts studios or friends homes. It was then that he crossed paths with a Japanese karate master, Oscar Higa, who became his teacher, mentor, friend and father figure. For a while, Fabian spent time in Rio; living the life of a nomad, finding refuge on warm beaches. Then he collected himself, deciding to follow Oscar to Italy.

It was there, in the small town of Padova outside Venice, that he began his career as an artist. What painting means to me, he says, is that I escape from the world I dont like. I feel so comfortable doing it. European tourists liked his work. Fabian began having small exhibitions.

He spent his time painting and teaching martial arts, the latter to support himself. His dream was to become a karate master.

After seven years in Italy, where he traveled frequently, giving martial arts exhibitions, he moved to Japan and continued to teach karate, not realizing that martial arts would become such an influence in his painting technique and, indeed, in his lifes path. Inspired by the Shodo, he utilized this influence to combine figurative and abstract styles.

Shodo is often practiced by Samurais and Buddhist monks. It is as much a discipline as an art form. With Shodo, Fabian explains, one sits on the floor with a sheet of rice paper, a brush and Chinese ink. The artist begins to concentrate and, when he feels ready or the urge strikes, he starts to paint.

When a stroke is made on the paper, the artist cannot turn back. If he is unhappy with what he has created, he must start all over. Even when Im going backward and forward with my colors, the important thing is the determination of each stroke.

The influence of artists such as Lautrec, Picasso, Sargent and Cezanne are felt in Fabians work. But in the end it is my own, he says.

Today, Fabian has a studio in Los Angeles, where he also lives with his wife, Luciana and his three children. She is in many of his paintings.

For her, nothing is impossible. If I wish for something, she will try to make it possible for me. Mostly he works in the mornings and early afternoon, when the light is best. Usually he uses acrylic paint, so that he doesnt have to wait for it to dry. My paintings are dark, because I try to only give an idea. I prefer to paint the moods in color, so the viewer gets a sense of what is being felt. Painting is a wonderful way of communicating with people. It can be hard to explain everything that I feel and, in some way, people understand when they look at my art better than I could ever say it. He likens painting to music and this is particularly evident in his Flamenco pieces, where the dancer creates complex rhythmic patterns. I compare color and technique with music and rhythm, the subject matter and composition with lyric and poetry. I want to invite the viewer to remain in front of my paintings, not feel rejected by them. The longer they linger, the better my chance to communicate with them. When music is gentle, people will listen to it. I take things that people like to look at and then they see more deeply into it. Today, Fabian travels internationally with his Business partner and publisher, Robert Bane. Fabian has had more then 210 one-man exhibitions around the world including Australia, Europe and China.

The scenes from his youth in Argentina reflect a time that, in his view, is more romantic than the present day. A time when the man would take pride in shaving or simply fixing his tie. And the woman would follow a routine of slow and sensual movements, seducing a man just by lighting a cigarette. Today, in the 6th day of the fourth month of the year 2013, I take hold of my pen, and I dedicate this Website to all the people who left their mark on me and forged my destiny.

To Luciana, who makes my waking up each day, the happiest moments of my life. To my teacher Oscar Higa, for showing me the way, during my clear moments of blindness.

To my sister and family, for their patience and understanding. To my friends from everywhere, because they helped me, and always supported my ideas and deliniums.

To Renato, because he was the first one in adopting me under his wing. To my partner and friend Robert, who gained all my respect and unconditional trust. Because of his unequaled dose of optimism, dedication, altruism and gentility, amongst many other great qualities. Because of his talent to discover talents, demonstrated throughout his career. And to make possible what for many is impossible. To my mother Edua, for being the best woman in the world. To teach me that a woman can develop her life with a lot of courage, passion, and decision, without losing her immense tenderness and ancestry of a queen. Although he was a well known character of the nightlife, I remember that he always treated me with so much sweetness.

In an age where parents hit their children to discipline them, my father never touched me, not a hair, although I often deserved a pair of slaps. I inherited my ability to draw from my mother. I believe that the imaginative part of my art was inherited from my father. I dreamed of all the things that he promised me, and I lived them as if everything was there for me.

He used to tell me he would get me a blue coupe fiat car, also a white suit for me to wear when I passed the girls of the neighborhood. He promised me my own horse, and a 125cc motorcycle, and although all these things were never realized by me, and my father never completed what he promised, it was only because at the time he was in bad economic situation, but also because in that period, everything, would have been very risky for me at 9 years old.

I remember form a very young age, maybe at 4 or 5, when he secretly took me without my mothers knowledge to his office, and together we cleaned up hi guns, and revolvers from 38 caliber to 45 caliber pistols. I liked so much the 22 caliber pistol, that according to my father was mine. The period of school was short for me, thanks to my father. I went sporadically to the elementary school, and I left high school the first year. I would stay up late at night with my father and his friends playing dice, and he was my accomplice when before sleepingI turned off the alarm clock so it did not sound, and my mother did not wake up to take me to school. Now I would like so much that any day would become the Christmas day of 1986, which was my fathers last Christmas, my father and I just sitting and toasting together, and me listening to a man whom on the 20th day of January, 26 years earlier, extinguished the flame of his life at 57. But as his psychiatrist said: he lived a 100 years. GUARANTEED TO BE 100% ORIGINAL AND GENUINE WITH C. The item "RARE NEW FABIAN PEREZ ORIGINAL Study for the Living Room 3 GIRL OIL PAINTING" is in sale since Friday, November 15, 2019. This item is in the category "Art\Paintings". The seller is "asgard-arts" and is located in Buckinghamshire. This item can be shipped worldwide.