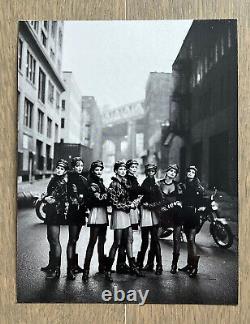 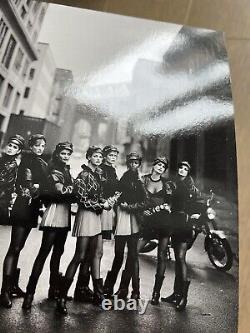 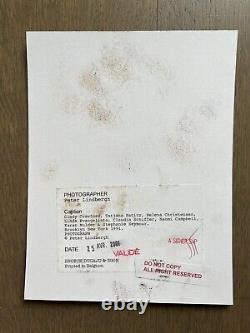 Size 16,8 x 21,8 cm. This Validation Print was found in the depths of an assembly workshop in the archives of a former Art printing works, preciously kept flat and protected from light. Although it is old with its 21 years of age, it has remained in a good state of conservation.

Some marks and traces of dirt on the back due to the manipulations of the printer. On the other hand, the front is intact, in excellent condition and of an extraordinary shine. This old print comes from a first printing limited to a few copies in different tones, the client selected one that he approved and validated as proof "good to print".

It was kept by the printer and served as a color model for setting up on the machine during reprints. When everything was in order, the client signed the print which then became contractual, the client's approval committed the printer to obtain an identical result for all the prints he had to produce. In 1991, on a street in Brooklyn, Peter Lindbergh managed the impossible, to bring together in a single image the supermodels who defined the 1980s and changed the concept of fashion. Dressed all in leather, in bikers, jackets, boots and caps, they are all there, apology of the eighties, the showy Cindy Crawford, Tatjana Patitz, Helena Christensen, Linda Evangelista, Claudia Schiffer eternally woman, sensual Naomi Campbell, Karen Mulder and Stephanie Seymour so fragile. A shot, a complete break with the way fashion was shown at the time. With his talent as a director, he alternates sequenced close-ups as well as subjective shots. The most important quality in his images is above all his frankness, his almost shocking honesty, his subjects seem to open up emotionally in front of his lens. It's not the appearance that counts, but the spirit of the person you are photographing. He spent his childhood in Duisburg in North Rhine-Westphalia. After an elementary education, he left school very early at the age of 15 and worked as a window decorator for the Karstadt and Horten department stores. In 1962, he left for Switzerland for eight months, then went to Berlin where he followed evening classes at the Beaux-Arts. He hitchhiked to Arles, following in the footsteps of Vincent Van Gogh, whom he admired, and continued his journey for two years, as far as Spain and Morocco. Back in Germany, Peter Lindbergh studied free painting at the "Krefeld" art school. In 1969, while still a student, he exhibited his paintings for the first time, at the "Denise René/Hans Mayer" gallery. In 1971, he turned definitively to photography and was the assistant of the photographer Hans Lux, in Düsseldorf, for two years and then worked five years as a freelancer, exclusively in the field of advertising, following a first and important publication in "Stern", he knows notoriety.

In 1978, he moved to Paris and began his international career, initially working for the magazines "Marie Claire" and "Vogue" Italian version, then British, French, German and American, later with "The New Yorker ", "Vanity Fair", "Rolling Stone" and "Allure". In 1988, Anna Wintour took over the helm of the American edition of Vogue, she recruited Lindbergh immediately, asking him to do the cover of the November 1988 issue, Lindbergh signed one of his most beautiful photos which was hailed as a graphic revolution in the world of the fashion press, that of the young Israeli model Michaela Bercu in the midst of the Israeli-Palestinian conflict. In 1990, he repeated the feat this time for the cover of British Vogue by taking an iconic shot that brought together Linda Evangelista, Naomi Campbell, Tatjana Patitz, Cindy Crawford and Christy Turlington, little known but who will be the supermodels who will develop in the during the 90s. Recognized then in the field of fashion, he produced numerous campaigns for haute couture, Giorgio Armani, Prada, Donna Karan, Calvin Klein and in parallel drew portraits of many personalities from both musical and cinematographic circles, John Travolta, Catherine Deneuve, Mick Jagger, Charlotte Rampling, James Coburn, Asia Argento, Dennis Hopper, Tina Turner, Madonna, Sharon Stone, Charlotte Gainsbourg, John Malkovich, Mylène Farmer among others.

Friend of the director and photographer Wim Wenders, he also turned to the production of documentaries and experimental films. In 1995, he was named best photographer by the "International Fashion Awards" and became an honorary member of the very exclusive German Club of Art Directors. That same year, in Berlin, he received the "Raymond Loewy Foundation" prize, the most important European distinction in the field of design.

In 1996 he produced the prestigious Pirelli calendar with Nastassja Kinski, Tatjana Patitz, Eva Herzigovà, which he renewed in 2002 with other top models. Peter Lindbergh's works are the subject of numerous exhibitions around the world, and the profoundly artistic dimension of his work opens the doors to prestigious art museums in Paris, Tokyo, Berlin, Milan, Rome, Moscow, New York. And Beijing, He is considered one of the very big names in contemporary fashion photography, signing cult photographs throughout his career. He is at the origin of several important innovations in the world of fashion photography. Towards the end of his career, he alternated his life between New York, Paris and Arles.

This is a print validated on press by the client that the printer had archived as a color reference model. And laminated on a support in order to be able to preserve it over time. Sale as is, no return.

Please see my sales list. Thanks a lot to the following photographers. This item is in the category "Art\Art Prints". The seller is "ra_galerie" and is located in this country: US. This item can be shipped worldwide.