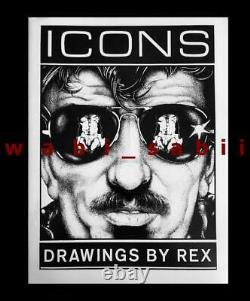 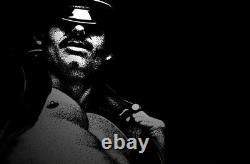 This is a Rex Collectible. Unnoticed for a generation, a legendary and mysterious figure pre Stonewall. Disillusioned with commercial art, he dropped out for several years but re-emerged in the 1970s as one of the leading figures visualizing the fetish and S&M subculture in New York and later San Francisco. He was much influenced, he said, by his chance discovery of a probably bootleg magazine of the drawings of Tom of Finland which irrevocably changed his life.

" The depiction of men "having sex with men, passionately and enthusiastically" "spoke to him in a way no lover or anonymous stranger ever had In terms of his cultural interest, Rex is the surviving Godfather of Folsom which began in San Francisco and now franchised (Berlin the now famous offshoot). Beginning with Icons (1977) a series of portfolios were advertised.

Rarely shown or seen in their entirety, these were carefully considered and structured sets. Most artists of the era issued photographic prints, not art prints. The only comparable previous works of this type were the commercially made lithographic prints of George Quaintance art /Victor Garcia photograhe, who independently marketed his gay art in the early 50s. Rex ist als Künstler fast in Vergessenheit geraten.

Before Mapplethorpe there was Rex. Just as Tom of Finland realized and gave form to a new ideal of gay masculinity for the generation before him, Rex prepared the way for Mapplethorpe and the modern fetishists. He is the last of the legends from that era. A bit like an animal thought extinct - Guy Burch, UK artist - writer - curator.

On July 1, 1981 REX opened his gallery Rexwerk, in his SOMA studio on Hallam Street in San Francisco. Only ten days later it was destroyed and Rex's drawings and inventory burned in a fire started at The Barracks bathhouse undergoing renovation across the street.

The fire could not have come at a worse time, for July 1981 was also the same month the first case of what a year later was called Aids was diagnosed in the city of San Francisco. His commercial work and original art nonetheless continued to appear as regular features in sexual magazines such as Manifest, Just Men, Torso, Inches, Uncut , and In Touch. Other erotic artists such as Harry Bush (19251994), and British UK artist Bill Ward were colleagues. Later commissions included posters for gay bars; The Lure and Mineshaft, Rawhide and The Saint in NYC The Eagle in Washington DC.

Bolt Poppers and the Pleasure Chest underground stores; his art featured in the film Cruising with Pacino. His series of 8x10 print unbound portfolios were entitled (chronologically) Rexwerk, Uncut, Undercover, Armageddon, Scorpio, Rexland, Legends and Rex Sex-Freak Circus. The unbound format proved popular with buyers who had been frustrated for the need to dismantle the bound book format collections to frame their favourite images. Rex's drawings, made over months, defy the throw-away nature of most pure pornography and are more akin to graphic novel, gay pulp comics (Tom of Finland too) and the Japanese tradition of Shunga prints prints.

Robert Mapplethorpe knew REX and was attracted to his hard-core imagery relating to the Mineshaft. The photographer developed a photographic portfolio that reflected the same themes and, like Rex, had strong links with the West Coast fetish scene they both had work published by Drummer magazine editer Jack Fritscher, one of Mapplethorpe's lovers. He secured an invitation in April 1978 from Robert Opel to have a one-man exhibit at his newly opened Fey Wey Gallery on Harrison Street in San Francisco.

REX stopped publishing his work for several years. Disheartened by the politics America, he moved to Europe in 2010 to Amsterdam. Original, collectible vintage photographs, unique books of photography; famous and infamous photographers, and rare Magazines of the era; Heartland vernacular, antique original classics.

Darold Perkins has taken an Arrow Shirt ad and turned it into an ad instead. Next in the Drawings and Prints category we particularly love Paul Cadmus; the explicit Andy Warhol drawings -- he wasn't Tom of Finland.... But much more than Campbell's Tomato Soup We offer modern firsts, original photography, the arts, and gay erotica. You will also find a fine selection of signed copies, limited editions, and memorabilia because the goal is to deepen the pleasure of collecting. The item "REX ICONS MINT New Sealed vtg 1970s Leather Beefcake male nude Rare Gay Art Sale" is in sale since Sunday, May 16, 2021. This item is in the category "Art\Art Drawings". The seller is "wabi_sabii" and is located in Pensacola, Florida. This item can be shipped worldwide.