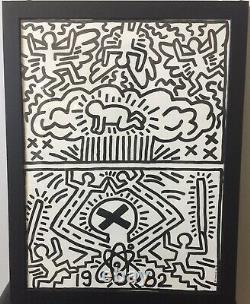 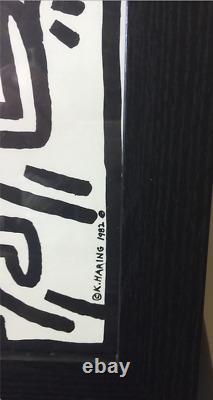 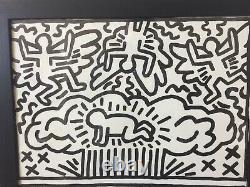 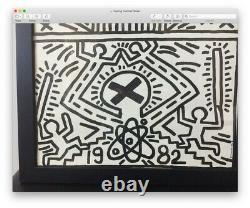 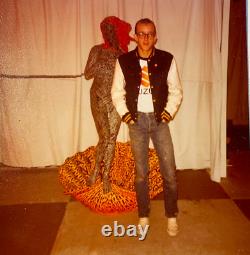 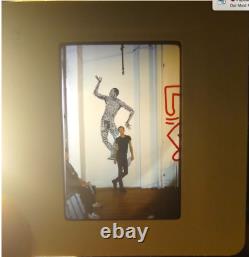 HARING created this image for the historic New York City Anti-Nuclear Rally against the Cold War arms race. Haring self-published this print on his own initiative, and on June 2, 1982, he stacked the prints in a shopping cart and took them to Central Park. Only one year after his first show, Haring was still relatively unknown, and despite it being published for the Anti-Nuclear Rally, few copies exist today according to specialists in Haring's work. DATE OF RALLY: June 2, 1982. Born: 5/4/58 Kutztown, PA Died: 2/16/90 New York, NY.

THIS item is in like-new condition. There may be some flash bounce on some parts of the poster images. FULL IMAGE OF KEITH HARING Litho Print in photos. Note: Slight fuzziness on some portions of image is an artifact of photographing through reflective clear plexiglass sheet.

THIS HIGHLY REGARDED HARING LITHOGRAPH WAS ISSUED ONLY FOR THIS 1982 RALLY. This lithograph is in its original, as-printed 1982 condition. Photos ATTACHED: - MORE PHOTOS AVAILABLE UPON REQUEST.

This item is from the ORIGINAL 1982 group of prints made available at the 1982 Rally of a striking promotional lithograph photo-offset print on heavy, glossy printing stock promoting Haring's anti-nuclear weapons sentiments and his concern about the nuclear arms race. Only a limited number of these original show posters would have been made made by Haring prior to the rally, and distributed by Haring at the June 1982 anti-nuclear rally. My late sister attended this event and obtained this poster directly from Haring. This original photo offset promotional poster is 18" wide by 24" tall. It i s essentially in the same condition as it was when Haring was passing them out at the rally.

CONDITION: Please view the high resolution images included in this listing to judge the excellent condition of this poster for yourself. This ORIGINAL Haring Exhibit Poster is from the estate of my late sister (who was herself an "outsider" artist and attended a great many art exhibits and Haring events in New York and New England during the 1980s). I have photos of Haring taken by my sister at several gallery exhibits during the 1980s. A few photos of Haring taken by my late sister Shelley are attached along with a Haring signed dedication to my sister on the pink cover opposite a first page from the Program for one of Haring's shows. This signed page with 2 barking dogs is not available for sale, but is included as a type of provenance for the legitimacy of this poster and other Haring items being offered in my various listings. The authenticity of this lithograph is absolutely guaranteed. This poster was found among a group of original show promotional posters from various Haring and other New York art scene artist exhibits including K. In liquidating the estate of my late sister. This poster was carefully stored in 1982 after my sister attended this rally. It was never touched again until this poster was found after her passing.

See my other listings for SIGNED HARING SHOW POSTERS, one with an original drawing by Haring with his signature. Also available is a Haring signed book ("Art in Transit") showing Haring being arrested by a NY Transit policeman for tagging on the subway platform walls. Haring's signature is on. Radiant Child T-Shirt Haring is wearing.

OTHER KEITH HARING ORIGINAL SHOW LITHOGRAPHS BEING OFFERED IN MY OTHER CURRENT AUCTIONS [OR SOON TO BE LISTED] INCLUDE AMONG OTHERS. O HARING AT FUN GALLERY ORIGINAL SHOW PROMO LITHOGRAPH --- Issued: 1983 - 1 remaining.

This item is in the category "Art\Art Prints". The seller is "radproject2" and is located in this country: US. This item can be shipped worldwide.